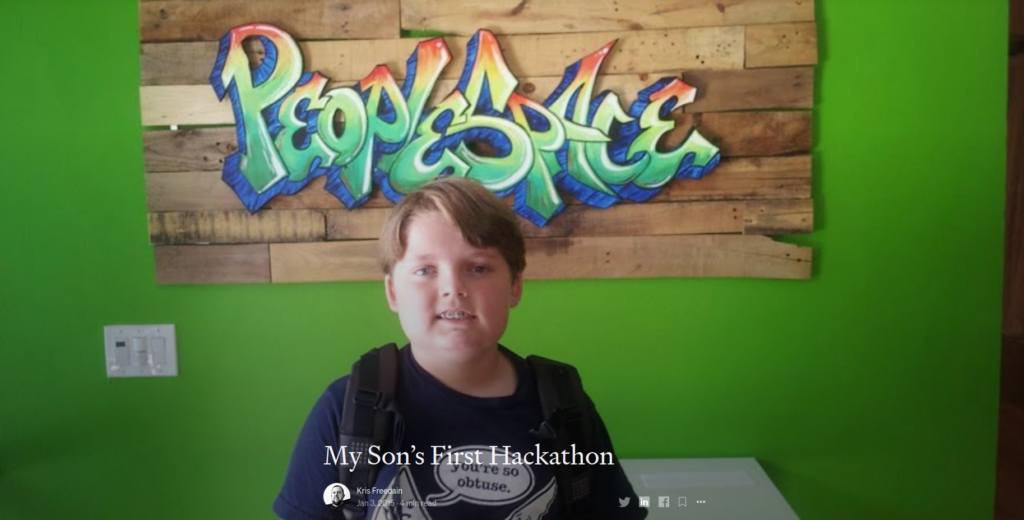 This past weekend, my son attended his first ‘hackathon’. When Dawn found out about it we signed him up pretty quick to ensure it wouldn’t fill up. He wasn’t sure what to think when we went asked him if he was interested, but as we talked about what he would be doing (and that he would be on the computer for 6+ hours) he was completely sold on the idea. 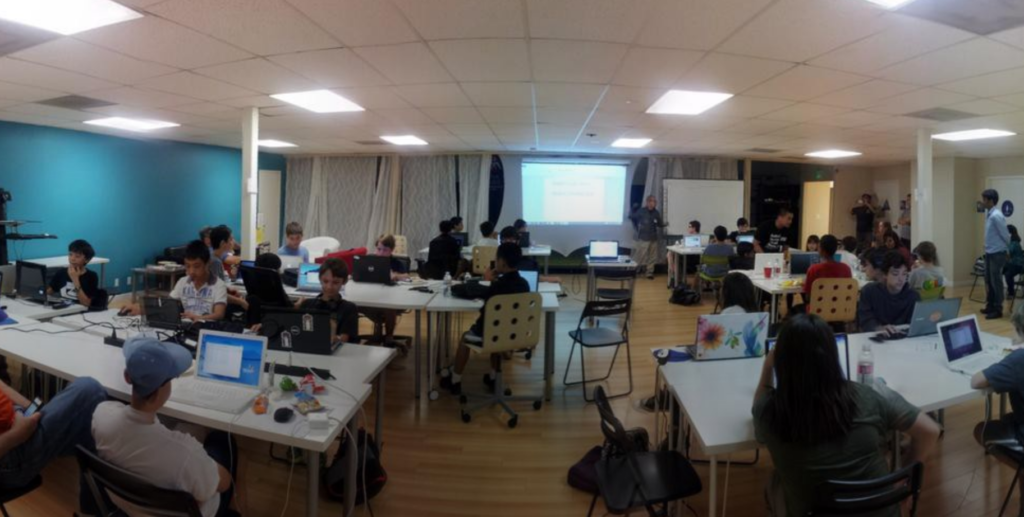 We have a local startup incubator and coder community that has been doing an amazing job putting together events and classes geared towards youth. The main community for these have been through a group of individuals associated with PeopleSpace.us. If you have kids interested in coding and technology in the Orange County area, I highly recommend connecting with them.

The Hack.KID.Thon began at 12:30 on Saturday, March 15th. We arrived a little early so he could setup and see which of his friends would be there. By the time the event started, more than 30 boys and girls were there, ready to hack.

Workstations were setup for teams of kids to work together in groups of 4 or 5. This allowed them to assist one another.

Before the teams separated to code for the day’s competition, the mentors asked for a number of ideas for the seven different websites they would be working on. It was fun to listen to listen to what they could come up with; from Minecraft to The Hobbit, from Video Games to Personal Electronics, the kids were full of good ideas.

Once all the ideas were decided, they split into teams and chose one of the topics to develop a site for. Ian’s team got video games; right up his alley.

They each were assigned a section of the bootstrap site to work on and would combine the code back together on the team leader’s machine when complete. Ian got the ‘team’ section of their site where he had to create personal About Me areas for each person on the team. I enjoyed watching all the kids interact with one another. It was a great introduction to group development work.

Once the teams had completed their sites, they had to FTP it to server and be ready to present in front of the other coders, mentors, and judge.

With help from others in the group, each of the presenters did a fantastic job talking about the different features of their site.

Each team did a fantastic job presenting and the entire group had a blast seeing what one another did. The sites they put together had some really fun features, one of my favorites was a site for The Avengers that had a ‘Happy Customers’ section where an older women praised them for helping her get her cat out of the tree! So creative.

Once the teams had all finished their presentations the judge went off to tally up points. He came back and gave each team some positive feedback on what they accomplished and let them know the points assigned. Ian’s team got 2nd place out of seven teams!

Ian had a blast and I think he is going to be re-doing his own website soon with the skills he learned at the Hack.KID.Thon. I’m extremely grateful to all the mentors involved from PeopleSpace.us — they did a great job and we’re looking forward to future events they host.

View all posts by Kris Freedain